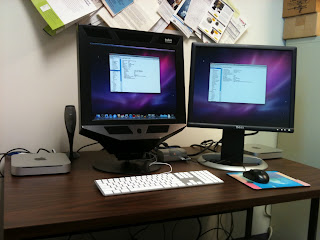 I haven't updated the blog in a while, it's been a busy semester. However, it's ending with a lab upgrade that I've been working towards for about a year now. Ever since one of the Windows machines driving one of the eye trackers gave up the ghost and died. It was an old Sun w2100z machine probably past its life expectancy. A replacement was found, but I think they nearly had to pull it out of surplus for me. So this time around instead of mucking about with very large workstations, I decided to replace both server/client at each eye tracker with a Mac Mini. You can see the two little silver boxes in the pic. Each Mac Mini has 8 G of RAM, an Intel Core Duo chip and an Nvidia GeForce 320M chip with 72 GPU cores. Not bad for such a little box! One Mac Mini will be used to run Windows to power the Tobii eye tracker, the other will be used as the client workstation. Since most of my programs work under OS X, I'm hoping that I can develop some cool eye tracking demos on them. Including real-time heatmap rendering and GPU-based scanpath comparison. I'm now just waiting for software installs on them, and testing whether the 400-800 firewire cable will work between the server and the Tobii (it should).