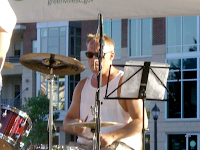 The pic is back from our gig on July 7th. Right in the middle of a heat wave, when it went up to 98F. If I look like I'm trying to concentrate, I was. I don't know whether it was the heat, the Gretsch drums, or something else or a combination of factors, but I was not having a good first set. I think it played ok, but I know I made a couple of flubs here and there. I pulled out my old Gretsch drums but I haven't played on them in a very long time. Lately I've been playing on the Tama rockstar kit I traded for my old Pintech electronic set. I like the Tama's larger toms and I think its compactness—one less floor tom. The Gretsch kit has two floor toms and maybe because of that seems more spread out. I remember missing the right crash symbol because it was out of my immediate reach (had to stretch for it). So after the gig I transferred the bass drum's resonant head (with the band name on it) onto the Tama kit and bagged the Tama kit. I don't think I'll be using the Gretsch kit any more, so it may be time to start looking for a new owner for that kit. Right during setup I busted a resonant head on the small 10" tom...it sounded kinda crappy the rest of the night, another reason for a lackluster first set...once I got into the habit of going for the second tom, and the temperature went down, the second set was much better. 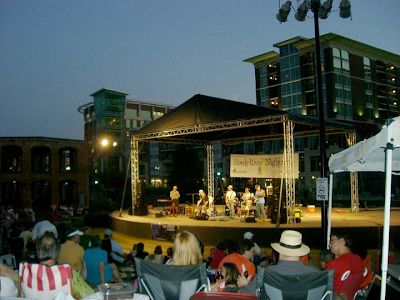 Posted by Andrew at 3:49 PM No comments:

Tomorrow the Hoodoo Hounds play at the Reedy River Nighttime Concert Series. Just ahead of this gig we got a story on us printed in the Greenville News, our local city paper, as you see above. The full story can be found here.

Posted by Andrew at 9:44 PM No comments:

As soon as I got back from Barcelona, it was straight back to work. I was already a week behind on my meetings with this year's REU students, so it's been pretty hectic. Today is the last day of the 4th of July long weekend, and since I'm stuck at home on the couch, I thought I'd update the blog. Somehow I managed to pull my left pec muscle a couple of days ago, which is why I'm sitting here coding and not out on the boat. I guess it must have been lugging the new sailboat battery that did it, but I can't be sure. All I know is my left pec is so painful that it's difficult to breathe. I wanted to get out on the sailboat, give it a nice cleaning, and putt around on it, but I'm having trouble moving around much. It's nice to have caught up to some badly needed coding, but it's really nice outside, too... Hopefully this goes away by tomorrow, because that's when I need to load up the truck with my drum gear for Wednesday's Greenville gig. Tonight is band practice, when I'll see how I can play in this condition. Major annoyance. Anyway, above is a short video of the fireworks that the city of Clemson puts on every year at the YMCA beach. We get out there on the motorboat and sit and watch (a major reason for getting the powerboat back in '03 I think it was—the idea was to have it on the water by July 4th—I think we got it in the water just in time). This is the first video upload I've done on the blog, hopefully it turns out ok. I shot the vid on my iPhone, so it may be a little blurry, although I think it managed to focus itself fairly well.

Posted by Andrew at 4:21 PM No comments: