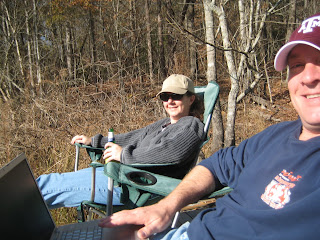 This year Thanksgiving brought nice weather once again: sunny and mild. So we decided to sit out on our dock as the bird was cooking in the oven. The lake level is at an all-time low, 22 feet below full pond at 638. Once the level drops 18 more feet, the cities of Clemson and Anderson will be unable to draw water. Sounds pretty ominous. Anyway, the view from our dock is now of the beaver pond. Not enough to canoe on, but pleasant to look at. Later on we enjoyed our turkey dinner, with all the fixins. The Aggies lost 49-9 in the annual game against tu, meanwhile we watched our favorite British Christmas movies: Love Actually and About a Boy. Today, it's turkey sandwiches and then I'm not sure what we'll do later. I'm couch-computing, writing up a couple more grant proposals (what else is new!), mainly piecing together bits from older rejected attempts. Gotta keep plugging away...but I can only muster a couple of hours of this while sneaking peeks outside—when it's sunny out and no wind, it's time to take the cats out for a walk. I'd like to go over the beaver dam to the spit of land between the beaver pond and the tree channel. There are some tall grasses there that the cats like to hop over. 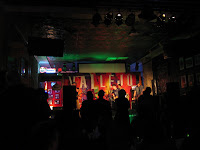 This morning we're getting ready to head out to the airport to get on the flight home. So this post I'll try to sum up the last couple of days. Wednesday night we went out on the town to catch more music. At Maggie Mae's we found Vallejo (pronounced "Va-yeh'-ho", or "Va-ley'-ho"...or as their front man quipped, if you're from Alabama you'd pronounce it "Valley-joe"). These guys were really good, playing a kind of Tex-Mex rock style (Norteno maybe?). The addition of the extra percussionist on congas and other instruments really sets off this style of music. Similar in a sense to Santana, although Santana's sound is quite different (more soulful perhaps, less edgy than these guys). Later on that evening we caught the last couple of songs from Hosea Hargrove, a three-piece blues ensemble. The front man was this old blues man, sitting playing guitar. He looked like he was really old, especially once he got up since he seemed to have trouble walking, but man, he could still play solid guitar. And sing, too! They were really good, making playing the blues look really easy. I bought their CD and it's pretty decent although they've added more instruments to it, which almost obscures the quality of the three-piece simplicity we heard that night. 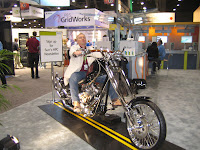 Thursday was the last day of SC '08, so we took a few minutes to walk around the exhibits floor. There were various gimmicks around, here we had Sun's Java bike that they let passers by sit on. So I tried it out. It's a little longer than my Harley, as it's much more of a chopper than my standard softail.

Thursday night they bussed us out to Star Hill Ranch for the reception. Some kind of noreaster happened to have blown in so we were all freezing while queuing up for barbeque. As it often happens at these things, there are never enough food tables for the number of people that show up, which more often than not results in long food lines. We waited half an hour freezing our butts off for a plate of BBQ. The food was good, and after washing it down with a couple of Negro Modellos (Mexican beers), we felt a bit better. Eventually we got in out of the cold to listen to this country band in one of the buildings at the ranch. They were good, we did some line dancing, and watched some really good two-steppers. They inspired me to go look for dance lessons when we get back. On the way out we patted and said good bye to the beer-toting burros (Mexican for donkeys—they were really cute) and got on the bus. 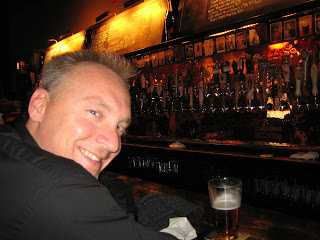 So that's it from Austin, TX. We're all packed, suitcases a bit heavier than what we started with, and ready to go. We love TX and look forward to coming back. Adios! (PS. That's me at the Ginger Man—a bar with 80 beers on tap, just wanted to give credit to the place. It's right next door to Fodo, an Irish pub we had dinner at one of the evenings. Wherever I am, I can always go for bangers and mash for dinner :)

Posted by Andrew at 9:04 AM No comments: 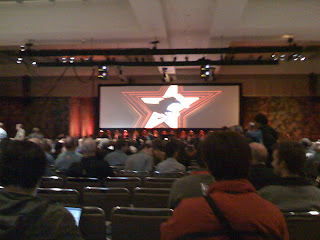 On Tuesday we listened to Michael Dell deliver the SC'08 keynote. The first part was interesting when he covered a bit of historical ground of high performance computing. The second half degenerated a bit towards a Dell marketing talk with slick slides of Dell servers, laptops, etc. Not as informative as it could have been. Meanwhile, David Patterson's keynote the following day was much better: computer CPUs are going parallel, and that's that, so we better start learning to program concurrently and come up with new and interesting apps to make use of parallel cycles. I guess this has been brewing for some time, but it looks like chip manufacturers have no other choice, so computing's next evolution starts now. I suppose we really should start teaching concurrent programming in freshman courses. 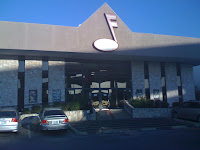 Later that afternoon we took a cab ride to Strait Music. I was looking for a nice-sounding china cymbal, and the only real way of choosing cymbals is to hit them. Most stores (the good ones anyway) will let you do this, at the risk of annoying all other store patrons. Here, they had a kind of closed-in patio room where they slid shut glass doors so you were in this kind of glass cymbal booth where I could hit all the cymbals there with abandon. And I found one, too. A nice 18" Meinl china cymbal that I plan on using on tunes like John Lee Hooker's This is Hip if and when the Hoodoo Hounds pick that song up again.

Posted by Andrew at 1:12 PM No comments:

San Marcos and the Beowulf Bash 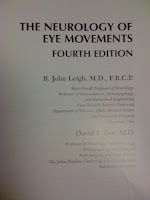 On Monday I went down to San Marcos to visit a colleague of mine at Texas State University. He invited me to give a talk, we discussed our collaborative grant proposal that we're working on, and he showed me this informative book by Leigh and Zee on the Neurology of Eye Movements (4th ed.). Fascinating stuff, will have to see if our library has it and/or inquire with the publisher about a desk copy for my eye tracking class.

Later on that evening we went out with our Hoodoo Hounds front man to the Beowulf Bash. The Hounds' lead singer and guitar player is a prof at Clemson researching parallel virtual file systems, and it sounds like he's been working on computer clusters since their inception. The Beowulf Bash is an annual get together of these researchers at the SC conference that he started. This year the Bash was at a dueling piano bar place. Every so often the piano players would ask people to get up on stage and perform some well-known number like the all-time favorite chicken dance.

Posted by Andrew at 9:49 AM No comments: 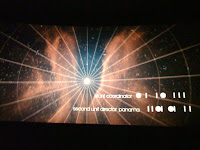 We ended our shopping day last Sunday by going to the theaters located at the Barton Creek Square Mall. Corey found this mall online and checked in advance whether it had theaters and whether the new Bond flick was playing. I think they had the movie playing just about every hour. Which gave us a bit of flexibility in shopping time. I tried to catch a good frame of the bond flick on my iPhone, but just managed this piece from the opening credits—looks a bit like the opening to You Only Live Twice. The movie was a good action flick, with chase after chase, but I think in terms of a Bond espionage thriller, it was rather flat. It seemed that Bond didn't have to think much to figure anything out (basically triangulating in on cell phone usage was about the extent to the whodunit aspect of the movie) and he was never in any real peril. Contrast that with Do you expect me to talk?, No, Mr. Bond, I expect you to die! classic exchange between Bond and Goldfinger and in this one Bond never seemed to face any particular crisis. Anyway, Corey summed it up pretty well: it seemed like an Act II of a trilogy. Trilogies seem to be the trend these days, whether it's due to the economics of movies and/or actor contracts, or whatever else, maybe they're just banking on Craig signing on to do just three Bond flicks, so the planning is somewhat short-ranged. Perhaps the third Craig-as-Bond flick will be better?

Posted by Andrew at 8:59 AM No comments: 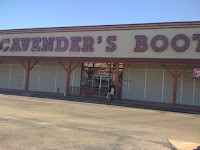 I was so happy with the Lucchese boots I bought in Reno that one of my missions here in Austin was to visit Cavender's Boot City and get another pair! Texans know cowboy boots. Not two minutes after I enter the store and try on a pair of boots (too large), one of the floor guys runs up and goes, "too big, right? Here, follow me, try these on!" I couldn't believe it. They guy got my foot size just by looking at my feet. 10.5 D and they fit like a glove. Beautiful brown pair of Lucchese boots. I coulnd't help but splurge and get myself a second pair of two-tone ostrich boots. They look great and feel even better. Like wearing gloves on my feet.

Posted by Andrew at 1:22 PM No comments: 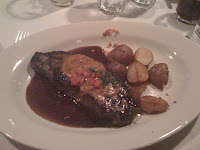 10 oz. NY strip, medium rare done to perfection. Yup, Texas knows steaks, so when in Austin seek out good steak houses. Our first night in Austin (Saturday), we ventured out for dinner at a Louis 106 or something like that. On 6th street of course. Pricey, but very good. After dinner we went out in search of some good live music. At first we went up the street in the wrong direction and so we were becoming quite disenchanted to see more and more office buildings and no bars. 311 was some kind of restaurant and not the blues bar we had visited some 10+ years ago. And with some freak cold front in town, it was not a good night to be walking about with a light jacket and wimpy shoes.

Lucky for us, 6th street is still 6th street, and once we got on the right side, we found what we were looking for. That evening 311 Club seemed rather empty but Nuno's had a good sounding blues band so we hung out there for a couple of hours. Very good band it turned out to be, made playing the music look really easy. I never did catch their name. Hopefully we'll get to go up and down 6th street again before we leave.

Posted by Andrew at 1:12 PM No comments: 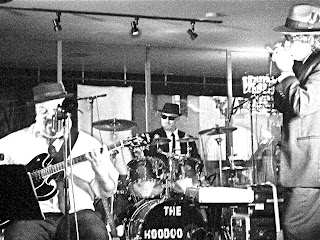 The hard working all star Hoodoo Hounds were out last night playing the Halloween gig at 356. The crowd was pretty minimal, as expected. Most of the student body left town already for fall break. Still, we managed to draw in a few people around midnight. So to keep them in we played our second and third sets back to back. Man, that was pretty tough, I was pretty wiped by the end. Recovering all day today...

Posted by Andrew at 4:16 PM No comments: