NWA flights to YVR: how's that merger coming along? 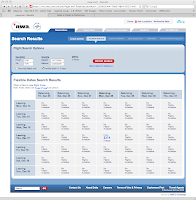 I'm trying to book a flight to YVR for Christmas...maybe I'm trying to do this too early? Maybe I should abandon attempting to do it via NWA? I'm not sure what their problem is, but it's pretty frustrating. They offer tantalizingly low fares ($374 per person), but when I click on the suggested itineraries, I either get an error or a message stating that that itinerary is no longer available. I've tried numerous approaches, varying dates and times of departure, several airports including Charlotte (CLT), Asheville (AVL), and Greenville-Spartanburg (GSP). The latter is the most convenient but seems to cost $100-$200 more for the convenience. ATL is a mess, I'd rather avoid having to fly through there. CLT is nice and I wouldn't mind driving up there and the itineraries offered are pretty decent...flying through Cincinnati (CVG), Minneapolis-St. Paul (MSP), or Salt Lake City (SLC). I'd like as few hops as possible, with a decent time of departure (e.g., noon-ish). Some of the combinations look really good, every one I select comes up as no longer available. Which is why I thought the screenshot at left was pretty funny: eventually I managed to blank out the entire date adjacency grid except for that tantalizingly low but unavailable fare. It could be the NWA/Delta merger, but even Delta for similarly low fares comes back with "We're sorry. The fare you chose just sold out. See our lowest available fare below." Give it another week maybe? I'll keep looking at this and see how things change, but at the moment it's pretty laughable.