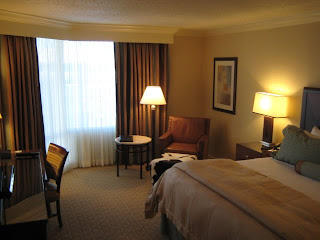 Aspen skiing was great. Getting in and out of Aspen, however, was an adventure I would rather not repeat. Getting there we were delayed. Getting out also was no picnic. We knew there was a winter storm coming, but had no idea what kind of chaos it would cause. Most flights out of Aspen were canceled. We weren't sure about our flight, but the suggestion we got was to get out of Aspen by road. We rented an SUV for a small fortune, and I drove it 6 hrs to Denver. Later we found that our flight out of Aspen (to Chicago) had indeed been canceled and at the time we were also told that should that have happened, the chances of getting out of Aspen would be slim until about Tuesday. So from Denver we flew out to Chicago and spent the night at O'Hare. Not fun. We found two benches that we slept on, but I think I only managed about one hour's worth. The vacuum cleaner lady kept me up for what seemed like hours. The flight out was delayed by about twenty minutes by de-icing of the wings. They first (what looks like) steam off the wings and then apply this green goop that looks like anti-freeze. Once we got home it was a mad rush to get the cats out of "jail", and then home to pack. The next morning I flew out to Austin. This time I had to trouble with the flights, but I was lucky to have booked the flight and hotel way in advance. The flight was oversold by 8, and several people couldn't get on. The hotel I think is also booked solid, partially due to SXSW: South by Southwest, some kind of music festival that is just ending today. I missed most of it, but the shuttle driver told us that yesterday there were thousands on 6th street. I'm not sure what remains of it tonight, but I'm hungry and it's time to go out for dinner, so I'll find out. The conference starts bright and early tomorrow morning at 8:30.

Posted by Andrew at 8:06 PM No comments:

Back to the Highlands

This is I think one of my favorite lifts on the Highlands, although the runs that lead to it are all quite difficult. This is Temerity, and it's the lift that you take up after doing the bowl. On the last day I skied Soddbuster, a kind of steep chute that reminded me of a long version of the Soudan Coulouir on Blackcomb. What also interesting is that there are several runs that I had just found that are to the left of the chair (when looking up). They are all kind of hidden within trees and I think all of them have fairly interesting (and challenging) moguls. Below is a pic of Mushroom that I saw on the map but couldn't find immediately. I finally found it below where skiers get picked up by the cat to go to the bowl. The reason why I liked the Temerity chair, I think, is because it reminded me a lot of the old blue chair on Whistler. I don't think that the blue chair exists anymore. Last time we were there, the blue chair was replaced by something larger and faster. I dunno; that new lift, while faster, seemed to lack a certain "familiarity". I'm not sure how else to describe it, but Temerity had this feel to it. Maybe because it was somewhat slow and quiet. You felt like you were getting a well-deserved rest after getting through the tough terrain that you had to get through to get to. 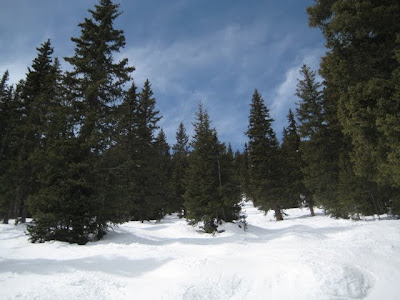 Posted by Andrew at 7:53 PM No comments: 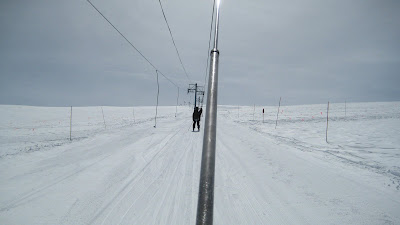 I don't think I took too many pics on Snowmass although it's a pretty decent mountain with lots of terrain. Sheer Bliss is a good chair with very good runs. Right near the top of this lift is the poma lift pictured above. They called it something other than poma lift, but that's the name I remember for this contraption. The terrain up there is some kind of ptarmagan territory, although I didn't see any of them. Actually, after all the buildup, the run down was rather uninteresting. Just this sort of flat road.

Posted by Andrew at 7:49 PM No comments:

Inside the Highlands Bowl

Inside the Highlands Bowl. At left is the shot I took after skiing down just about the first drop-in of the bow. I was then standing at the bottom of my run looking up at the rest of the drop-ins that one has to hike to to ski down. I'm too lazy to hike all that way (takes about 20 minutes I was told), but I've heard that "G-5" or "G-8" is worth the hike—that's the run where you can just make out where the skiers are. The shot at right is after I skied down a bit, further away from the bowl. The ski-out is fairly nice, with somewhat flat moguls that you go through to get to the cat road that takes you to the lift.

The pic below is of the run I took down into the bowl. There was one other guy after me, which gives you an idea of scale. I'm looking straight up, so you can see that the run is somewhat steep, but not too treacherous. The snow this year was much better than last year as it was a bit colder so not as slushy. 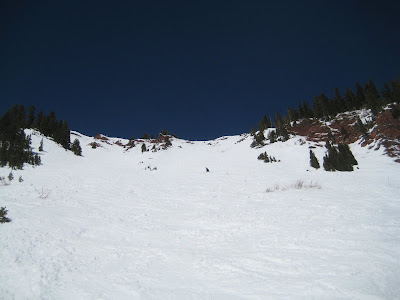 Posted by Andrew at 7:37 PM No comments: 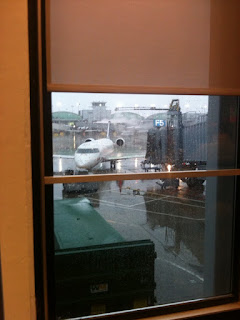 The return trip looks worse than the outbound leg. This time a winter blizzard came down from BC and arrived in Aspen the day of departure. The Aspen-Chicago flight was cancelled and anticipating that I decided on renting an SUV to make the 6 hr drive out to Denver. The flight made it out to Chicago where we spent the night sleeping on airport seats. Now we're waiting on the flight home which is already delayed 19 minutes. Why? Maybe due to the storm that caught up to us. It is now snowing in Chicago and de-icing is required.

Posted by Andrew at 8:42 AM No comments: 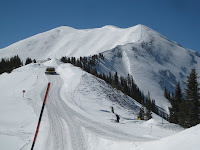 Despite United's best efforts, we finally arrived in Aspen and set about getting our ski gear (rentals) and settling in to the hotel (crappy wifi connection so I'll have to write more later). We lucked out with weather again and again and got 4 straight days of fantastic sunshine. At left is a pic of the Highlands bowl and the only way of getting there: by snowcat. I didn't see that stick in the frame, so it looks odd, sorry about that, but I had to hurry and get my skis off before boarding the cat. This one was full, kneeling room only. The best way I can describe the cat ride is like getting on the plane for a skydive: kinda smelly due to the exhaust but exhilarating because of the expectation. I dunno if others got this, but just about every time I boarded the plane for a skydive, I got drymouth from the excitement. As Patrick Swayze said in Point Break: "100% pure adrenaline, other guys snort for it, jab a vein for it, and all you gotta do is jump". Here, all you gotta do is get on the cat. More later...

Posted by Andrew at 7:29 PM No comments: 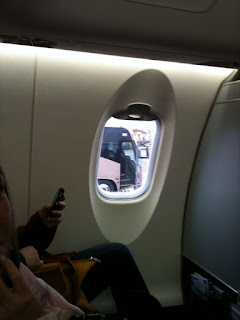 Too windy to land in Aspen, so they put us on a bus at Grand Junction.
Posted by Andrew at 2:08 PM No comments: 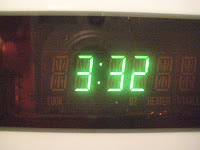 That should be a picture of beautiful Aspen...instead it's a shot of the microwave indicating the time early this morning. United screwed up yesterday delaying our outgoing flight by 3+ hours (we didn't hang around long enough to see when they actually few out). Since we had missed our flight we would have had to spend the night in Chicago. And because of course it wasn't United's fault (I heard "ATC", "weather", a litany of the standard B.S.) we would have had to pay for the hotel. Since I'm already eating the cost of the first night's stay in Aspen I decided to just come back home and spend the night here. So this morning it's a do-over for the incompetents at United. Let's see if they can get us to Aspen this time. I am thoroughly amazed at how consistently incompetent this airline is. Unfortunately I could not find anything else flying into Aspen. Next time I'll do everything I can to avoid United. Anyone reading this, please join me in boycotting United. I really think they want to go out of business. And I think they should. 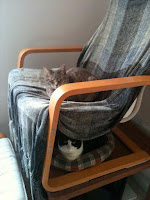 I snapped this pic this morning as part of my (winter) morning routine. The routine involves sending the cats outside for the day. In the winter they don't always want to go. Harley, the black and white one, hisses and tries to bite me. She's gotten better about the biting, but she'll still express her displeasure by hissing. Even when she's in that little bed of hers. When she's there, in the "cat towers", I just grab the whole thing and she gets a "magic carpet ride" to the door. I sometimes sing "Up, up, and away, on a magic carpet ride". Sidney, the grey one, clues in as to what's going on and she jumps down and runs under the bed. I then have to employ the "angry cat mom" technique of grabbing her by the scruff of her neck to pull her out. Funny thing that—I guess they retain this from kittenhood, but they still appear to respond the same way as when mama cat would grab them this way: they kind of go limp. Sidney even curls her tail under. When the weather gets warmer, both cats look forward to the outdoors, so in a matter of weeks I think some of this behavior will subside and in fact they'll start meowing to be let out.