I don't know where Corey gets these snack ideas, but they're usually pretty tasty! This morning it was Danish pancakes. They're more rather like donuts because they have a fruit filling and they were almost as sweet although they were pan-fried rather than deep-fried. Sprinkled with icing sugar these bite-sized morsels were a real treat. 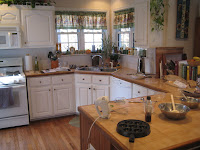 Now of course one must pay the piper as I have to clean up the kitchen. Whenever it's a new item she makes, it's like Hurricane Corey has swept through the kitchen. This time there's even a new, specialized pan used to make these mini-donuts. Oh well, the mess was worth the delicacy that it produced. 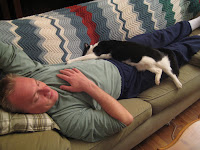 It was a lazy afternoon. Did some yardwork earlier, managed to break two power tools in the process. The lawn vacuum's (yes, lawn vacuum) pull chord snapped. I guess I'll have to dig up the manual and figure out how to fix it. Meanwhile I wasn't paying attention and filled up the 2-stroke leaf blower with regular fuel instead of the oil/fuel mixture that it's supposed to take. I couldn't get the thing started afterwards and I'm not sure what's wrong—did the engine seize? Is it old gasoline? Ugghhh...

Anyway, afterwards it was the annual Lone Star Showdown. Time to plunk down on the couch, eat some turkey, and watch the game. This year the Ags sawed Varsity's horns off just like it says on ESPN. Beat the hell outa tu! Whoop! 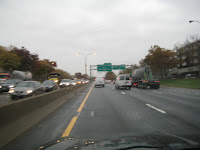 Had to get up to New York, NY for a day. Got a good flight up to LGA, direct from GSP, just a couple of hours. Put in some work on the latest paper I'm working on, and then took a shuttle bus out to the rental car place. I don't really like LGA, it seems like an old airport, with somewhat strange driving connections (the highways in NY are strange, at least to me). 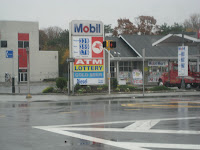 The highway out to Long Island (the Long Island Expressway, or LIE), was pretty busy, but traffic moved along ok. The return side looked like it was packed. Hey, check out the gas prices: $3.39 per gallon, wow! Back where I live, it's still at $2.85 but it's likely to go up if the price per barrel goes over $100. Finding the hotel was facilitated by Google maps, a super service. Sometimes they don't always give you the most direct route, but pretty close most of the time.

After seeing the folks and sibling, it was time to get back on the LIE and head back to LGA. I think the Wednesday before Thanksgiving might be the busiest travel day of the year, so I got up 6 hours before the flight to make sure I'd have plenty of time to deal with traffic, rental car return, shuttle bus to terminal, check-in, security, and, time permitting, breakfast and a Starbucks. Got all that accomplished and had a couple of hours to put more work in on the paper. The terminal was busy indeed. In trying to get some work done I kept getting these noisy kids sitting beside me. What saved me was iTunes and a pair of headphones. I played Blackened Blue Eyes by The Charlatans on single-song repeat.

Got some decent work done before flying home through Memphis. The plane out of LGA was late and I only had 10 minutes to catch the connecting flight. Luckily Corey was monitoring my flights and called me just after we touched down in MEM. She told me the flight to GSP was on time and that I better start running. She told me the gate and it was off to the races. I got to the gate to find the gate door closed. Luckily the plane hadn't yet pushed back. The attendant at the gate next door was on the ball and quickly punched the key code to let me in down the gate-connector-thingy (whatever that little tunnel on wheels is called). I don't know how they did it, but they even managed to get my bag on the plane so it showed up on the carousel in Greenville even though I had already started the paperwork on filing for lost luggage.

Posted by Andrew at 6:23 PM No comments:

This is part of the Clemson contingent at SuperComputing 2007, the conference taking place in Reno this week. Look, matching shirts! Well, for the most part...they have the same Clemson logos I think, just looks like they didn't color-coordinate that day. But where's Corey? Taking the picture perhaps? Probably at the craps table :)

No wait, there she is! Sitting in the CU booth, typing away on her laptop. Must be the morning ritual: grab a coffee and check email :) These pics came from CU's flickr site that one of them set up. You can get to the stream of images by going to South Carolina's SC 07 website. 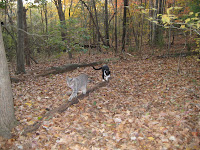 It was an unseasonably warm (79 degrees!) "hump day" today so I decided to take the cats on a forest walk after school. The route usually starts by a few quick steps to the dock. There we can inspect the water level, beaver pond, and estimate how much time left before the sun sets. There's almost barely an hour right now before the sun sets, so from the dock it's time to head out to one of our other usual destinations. We normally go either to the beaver dam (or across the dam and beyond), or past the beaver dam down the deer path. Or, like today, out to the tree diamond (or tree square, depending on your point of view). In the pic Sidney has finally caught up and both cats took the opportunity to scratch that log. Sidney usually lollygags brining up the rear. 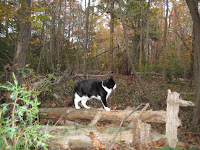 Here's Harley at the entrance to the tree diamond. We call it the diamond (or square) because of the square pattern formed by the fallen trees. Of course the cats like walking on these logs and climbing up anything still standing. Beyond the tree diamond is more forest bordered by a narrow creek. Sidney likes to explore this area of the forest. She hung around there today in fact, and I had to double-back from the dock to find her and coax her back to the house.

Good thing I got a chance to get out there today—the warm spell might be at an end...tonight we're expecting showers, a windy night, and a high of only 61 degrees tomorrow. Winter here already?

Posted by Andrew at 6:12 PM No comments: 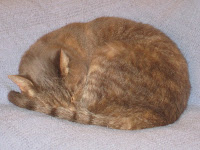 Corey jetsetted up to Reno, NV this morning so I'm "home alone". I got to work today before 8am and got so busy working on yet another paper (for submission to a conference in Reno, as coincidence would have it, but not till 2008) that I lost track of time. By 6pm I looked up, noticed it was dark out, and exclaimed "The Cats!". Still, I decided I had to stop by the store to pick up ingredients for dinner. Did that and then sped home to feed the little furballs. Sidney came in right away but I didn't see Harley. She came in pretty quickly after calling out for her, however. She literally ran in from the forest. Must have been starving! Anyway, made dinner (I think I have enough for several days), did some couch computing, and now it's already time to pack it in. I haven't heard from Core, so I'm assuming she's at the SC 07 gala. Meanwhile, one of the furballs came looking to cuddle on the blue blanket. I spread it out for her and sure enough she settled right in there. Now she's all passed out and I think I'll follow her lead. Good night! 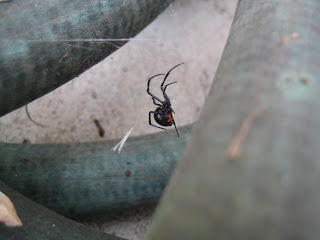 Corey discovered a rather unwelcome guest this afternoon, taking up residence in the coils of the water hose. It's a black widow spider.

Alice is wrong, however, since only female spiders exhibit the telltale red hourglass figure on their abdomen. The black widow spider (Latrodectus spp.) is venomous, injecting a neurotoxin that is 15 times as potent as that of a rattlesnake (according to Wikipedia, anyway). Good thing Corey didn't just reach for the hose, otherwise instead of adding this blog entry I might have been high-tailing it to the Emergency room.

Posted by Andrew at 3:23 PM No comments:

Forest walk past the beaver lodge 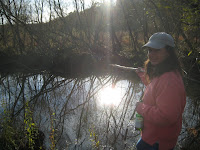 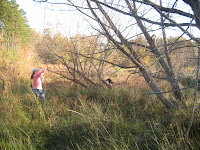 So here we are walking towards the end of the land spit between the two channels. The cats take the opportunity to climb just about every tree on the way. If you look closely you'll see each of them up their own tree. We were wondering whether or not Sidney runs up trees to get an aerial view of where we were heading. This was unexplored territory for the cats (as far as we know anyway). It was a pretty fun excursion, especially watching the cats make long leaps over the tall grasses out here. Corey wants to drag the canoe out there to explore the tree channel but I don't know if we'll bother; the canoe is a bit too heavy and unwieldy to portage all the way out there. Although it's gotten a little chilly around here for November, it was a gorgeous afternoon and sunset. 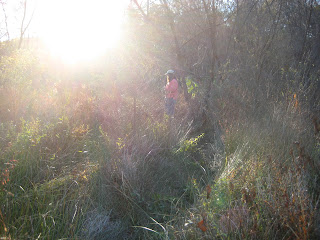 Posted by Andrew at 2:48 PM No comments:

So someone asked how do you burn a CD of mp3 songs so that you can play them in your car. That may be the most often asked question of computers these days :) Thankfully it's also one of the easiest tasks to do as well. So here are the steps.

That's it! Now wasn't that easy?

Posted by Andrew at 8:02 AM No comments: