My office building at UAB 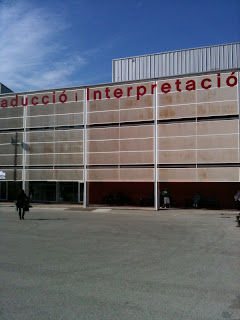 I've had some issues with network connectivity, so thus far this is the only pic I've managed to upload (emailed from iPhone over wifi a couple of doors down from my office...never mind where I was :) Anyway, this is where I'm at, and should be pretty much every day for the duration. I saw on Facebook that an old college friend of mine is now living in Calgary. Which reminded me that I did a co-op semester there, happened to be during the 1988 Olympic winter games. And it struck me: being here in Barca is very similar to doing a co-op semester. Only 20 years later, ha ha :) Mind you, the co-op semester in Calgary would have been about 4 months, not just the one. I seem to have forgotten most of the details, however :) Gotta go catch the train back to town (about an hour commute each way). Tonight after dinner I'm going to head out to watch Barca v. Inter Milan—the semi-final match in the League of Champions. I'm told that around here everything stops when Barca plays. Which brings back another parallel memory: Barcelona, to me, is similar in many ways to Montreal. A large reason for that comparison is the cultural distinction the Catalans embrace as do the Quebecuois. Furthermore, Catalan, the language, is a kind of mixture of Spanish and French. So hearing them say "D'accord" for example, reminds me of Quebec. And the somewhat curious neural association (in my head) between Spanish and French (when I want to think and speak in Spanish, French bubbles up to the surface, it's really weird and somewhat annoying) also brings up the Montreal association. I feel like accenting everything I say with Tabarnacle! or one of my other favorites. I'll have to ask my friends here if they have their own colloquiusms.

Posted by Andrew at 7:25 AM No comments:

Checking in on the sailboat 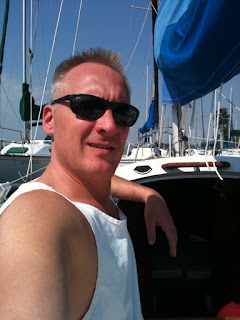 Proof that I visited the sailboat at least once this year. The boat needs some work, here are some TO DO items I want to tackle when I get back from Spain:

Those are the main things. Other than that, the boat needs cleaning and it needs its sails unfurled (undoubtedly a number of wasps have taken up residence). Other more long-range TO DO items include checking out the boat's electrical system, installing a wire bus (to clean up the wires), flexible antenna (replacing the car antenna that's in there now), putting in longer speaker cables, and installing the fan that's been sitting in a box for a few years now. I'd like to do more sailing this year, and split boating evenly between the sailboat and the motorboat so that Tippy II isn't used exclusively. Lake Keowee's nice and I'd like to take Pudgy out even if it's just for a barbeque lunch and some swimming.

Posted by Andrew at 8:48 AM No comments: 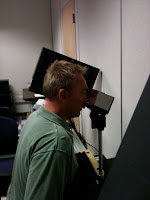 This is the last week of spring semester classes and the last week I'm home before flying off to Barcelona for 6 weeks. I was hoping to clear off everything on my TODO list so that I could spend the entire month of April working on code that I want to use in Barcelona as well as with the next bunch of REU (Research Experience for Undergraduate) students that are going to be inhabiting my lab for 8 weeks this summer. But of course as soon as I had cleared my list, a whole pile of stuff suddenly rushed in to fill the void, mainly the writing of 2 papers and 2 proposals. One paper didn't get done, the second did, following a late night of writing till 3am (resulting in the paper's on-time submission and a cold that set in immediately thereafter :P ) The 2 proposals also went out on time, with the second of the two coming down to the wire as well. I have a third one I'm working on presently, but I'll have to fine-tune that one remotely. At left is me wrestling with hardware that isn't working properly, but that we need to get going for an existing grant we're working on. The pic kind of reminds me of the work I did as a grad student over 10 years ago! I hate to leave stuff like this in inoperable condition, but time's run out. 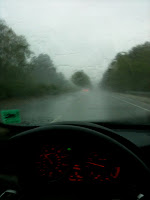 Meanwhile at home, I knocked off stuff I had to do around the house, including bug spraying the house exterior and crawlspace, getting the oil changed on the truck, and installing the second garage door opener. The latter and a gig at Backstreets consumed two of three free weekends I had at home after returning from Austin. I haven't had much time to update the blog with anything else and the only pic that I think I managed to capture was one afternoon when driving back in a thunderstorm. You can't really see it very well in the pic, but there were sheets of rain coming down. It was a welcome rain actually, washing off green layers of pollen that had accumulated in the days before. It was like driving through a badly needed carwash. I should probably wash the car again before I leave as it's starting to look green again. Maybe I'll do that today as I have to split early and get my haircut—I tried leaving that to the last minute so that I won't have to get another one until I get back home. When I return I will have 5 REU students waiting for me in the lab and I'll already be a week behind!