At the WSBF studio 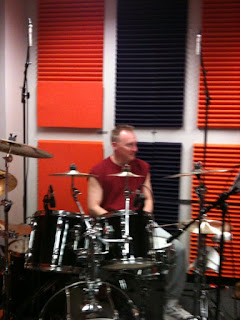 The pic is from our live session last Friday at WSBF, Clemson's radio station. We played a two-hour show from 7pm-9pm that included about an hour and twenty minutes of us playing (all originals save for one cover that usually play as our opening number), followed by about 20 minutes of interview with the band. I think we played well despite the fact that we couldn't hear the singer. Usually when we play gigs we have monitors (speakers) through which we can hear what the audience hears. This is useful for keeping place within songs (e.g., "is this is the first verse or the second?") as well as for anticipating changes. (Having just seen Michael J. Fox at the Vancouver 2010 Olympics' closing ceremonies reminds me of what he says to the band in Back to the Future: "Try to keep up and watch for the changes" :) My strategy was to keep an eye on our front man, basically trying to lip-read what he was singing. It was a pretty fun gig, and I think we may end up with recordings of the songs—maybe we'll cut a CD, call it "The WSBF Session" or something :)

A Dump of Snow 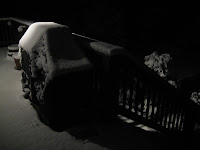 Here's a shot I took at about 3am, the morning of Feb.13. I'd just come in from playing a gig at Backstreets. It started snowing around 1pm and I don't think it let up till about 12 hours later. It dumped anywhere from 1-4 inches I'm guessing. They forecast 1-2, but it looked more like 4 to me. People around here freak out when it snows—they buy up all the milk and bread and they have no clue how to drive in the stuff. The next day we saw two cars in ditches. I drove the truck in 4WD and had no problems. About the only issue I have with this kind of weather is with water pooling in the garage. Seems the builders graded the garage floor with a slant towards the house. When the snow melts off the vehicles the water flows towards the house wall. So at 3am I had to pull out the car and sweep out as much water as I could. Today, only 2 days later, most of the snow's gone already. It doesn't last long around here. 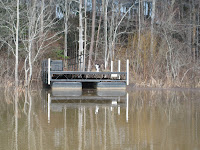 It's been a wet winter this year, raining quite often, sort of like...Vancouver! (Vancvouer's on the brain I guess because of the Olympics—we're watching excellent footage in high def.) I think I heard it's an el niño year. But that's ok, it fills up the lake, which is a good thing, as it allows us to canoe back there. The cats still haven't summoned enough courage to hop into the canoe as we cast off, but it looked like they were thinking about it this time. Instead, they elect to sit on the dock and wait for us to come back. And being winter, it's fairly cold out so we don't stay out very long. 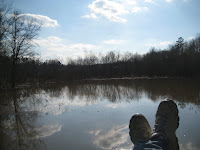 The other activity that the dock affords us is sitting on it in camping chairs. I don't recall where we got them, but they're the kind that have built-in leg rests and cup holders. We make use of both features, sometimes bringing down a cooler with beers to have something to put into the cup holders. It's more fun to do in shorts and sandals than it is presently in winter coats. But it's still nice to sit there and look out on our pond. And if you look closely, you'll see at least one parachute out in the distance over the trees. They're from the Flying Tigers DZ at the Oconee County airport, which is fairly close. I think they're nuts for jumping in February. It's got to be pretty cold up at altitude. I remember my biggest complaint from when I used to jump in the cold was how thin my gloves were. It's really cold on the hands. I bet they're not going to 10,500 this time of year but just doing hop-and-pops. Anyway, they're fun to watch. 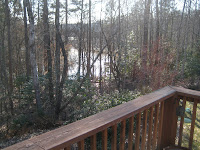 This shot is the view of the dock from the corner of our deck. It's nice to see the water from up here. In drought years it was disappointing to look out in this direction and just see meadow. I just hope the Corps keeps up the level through summer. I think the lake level right now is about the same height as it was when we put in the dock back in 2003. Since then I think we've seen two droughts, the first broken by remnants of hurricane Ivan (if I remember correctly), the second possibly the worst drought we've ever had when the Corps let the water drop I think almost 20 feet that's just ending right now. I think the Corps was expecting tropical storms that never came. We'll see what they do with the lake this year. Hopefully it'll be a good year for boating.

Posted by Andrew at 9:43 AM No comments: