Here's my 4th drum kit: the Tama Rockstar I acquired by trading my old Pintech electronic kit. I used this when playing with a second band that I was in for a while. The kit was at the place where we practiced. For a while there I was at band practice twice a week (and during one stretch three times a week!). My drumming improved by this extra activity and I enjoyed the music we were playing, but now that my services are no longer required, I had to bring this kit home. I'm not quite sure what to do with it: bag it, store it, or sell it? I cleaned it up a little for these pics and used the kit to test out my most recent cymbal acquisitions. The left pic features my Zildjian K Mastersound hi-hats that I bought in Montreal and the 18" Meinl Soundcaster China that I got in Austin. The China is trashy and loud and I will only use it sparingly at gigs. The hi-hats are quite good and I'm looking forward to trying them at our next gig on Friday the 13th. Although it's difficult to tell I also have a K fast crash in the pic at left that will likely be one my main go-to cymbals. The right pic has the A Custom Zildjian cymbal pack. These are fairly bright cymbals (meaning their sound tends to sustain for longer than "darker" sounding cymbals, like the K fast crash). I thought maybe that if I were to sell this drum kit I'd sell it as a whole, with throne, double kick pedal, and the A Customs for a complete and actually quite decent kit. But now I'm thinking I might want to keep one or two of the A Custom cymbals for a bit of variety on my main road kit. Or use the Tama Rockstar as the main road kit and sell the Gretsch? The Tama kit has boomier toms that I really like.

Posted by Andrew at 8:14 PM No comments: 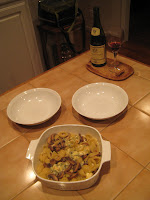 Tried another of Gordon Ramsay's recipes tonight: mac & cheese; a classic simple dish. Ramsay's gourmet twist on this was mushrooms, cream, and blue cheese. The result was creamy and very "blue cheesey". The blue cheese we used was quite strong and overpowered the dish. It's as if something else was needed. Not sure what. Still, wasn't too bad. And easy to make. Oh yeah, I paired a bottle of Beaujolais wine to dinner, not bad.

Posted by Andrew at 8:06 PM No comments: 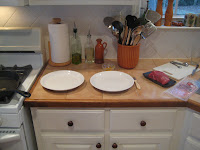 Inspired by Gordon Ramsay's Beef Wellington video, I decided to try it myself. In the recipe (you can find it on the web page for UK's series The F Word), he states that it's an impressive dish that is easier to make than it looks. I think it's a dish that he uses at Hell's Kitchen as well. He's often quite picky about this dish (and others; he's a bit of a perfectionist), and because there's a bit of an assembly to the Wellington, there's a bit of an intimidation factor in attempting to make it. What I'm trying to say is that you kind of feel like making this dish is a an incarnation for Ramsay to leap out from behind the stove and yell at you for getting something wrong. "Oh what have you done to those mushrooms! Are you mad?! Get out!!!" But of course he's right, it is easier to make than how it looks at the end (and it tastes even better than it looks!). 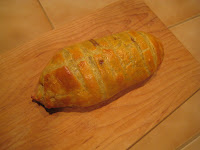 So to prep, I set out all the kitchen tools I'd need for the job: two skillets, two plates to hold the ham and fillet, as well as the dough rolling board and pin, sheet of cling wrap, and food processor (I had taken another shot of the other side of the kitchen but accidentally deleted it). The Wellington is basically a hunk of fillet mignon glazed in English mustard, wrapped in a type of mushroom duxelle (but in this case it's just the mushroom paste, no other additives), that is enveloped in a sheet of thin but fatty ham (should be Parma ham), that is all encased in puff pastry. Fairly simple...here you see the finished product. I was going to take pictures along the way but I kinda got wrapped up in the process, and since I clean as I go along, every time I had a break, there was nothing in the kitchen worth taking a picture of. 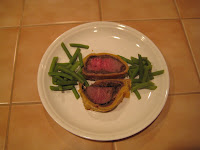 Some notes on the dish.

In the end, I got an A+ for taste and B- for presentation. Yeah, my Wellington (not pictured) fell apart on me slightly, and all we had was green beans as a side. So the plate was not that impressive in appearance, but the combination of flavors was excellent. After dinner we watched Warren Miller's Playground and a kind of documentary on Joe Strummer, the front man for The Clash. I heard that Playground wasn't that good. Indeed, the first part was pretty bad, with very rapid scene cuts that were really hard to follow. The second half of the movie was much better, however. Heli-skiing in Alaska was amazing, as was "speed-riding" in the Alps (skiing and para-gliding more or less, looked like the sport for me!). Finally, they also featured skiing on Tomamu, a ski hill on the Japanese island of Hokaido. That looked really cool and is definitely a place I'd like to ski one day. Not so much for the mountain (fairly small compared to the Rockies), but because I liked Tokyo when we were there several years ago. In the meantime, I'm not sure where to go in March, but I'd like to skiing somewhere...