Apple still hasn't gotten this right. It's almost there, but not quite. I'm talking about the CalDAV two-way communication between Google calendar and iPhone's iCal. The communication is only one-way at the moment. Upon updating iCal on the iPhone, the phone connects with google and updates the calendar. All well and good. Upon updating iCal on the desktop also updates google, BUT NOT the iPhone. The only workaround I've found is to go into the Settings → Mail, Contacts, Calendars, and then for each calendar you want updated change the URL by replacing the %40 with the @ symbol (like I'm doing in the pic), then launch iCal and wait for it to connect up with google and grab all the events. I hope Apple fixes this annoyance soon.

Update (Friday, July 31, 2009): I posted the essence of the above on Apple's bug reporting site shortly after I wrote it up. For some reason I didn't think I'd get a response from them. To be fair, they did (and quite quickly at that) fix an OpenGL problem a few years ago when I sent them code exploiting the lack of functionality. Actually, in retrospect, I remember being quite impressed that within a few weeks a software update patch came out fixing that very problem (among other things). So I don't know why I was skeptical this time. Maybe because of my own lack of understanding of what was going on under the hood this time around. Anyway, I explained to them what I wrote above. They got me to install some code on the iPhone to enable logging. But, after going through the paces with logging turned on, I could not reproduce the problem. My sneaky suspicion is that maybe that logging facility code contained more than just logging. I'm wondering whether they didn't just get me to test some patch of theirs. Well, so what if they did...iCal now seems to be working, and I was happy to report back that the problem has been resolved. It seems to be on my iPhone anyway :) 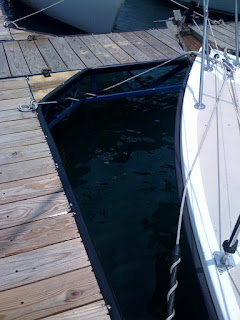 Today I went out to the sailing club to help with workday activities. I don't often come out but today I knew they were going to be working around our boat so I wanted to pitch in and make sure we got a rubrail installed (yes, I've hit the dock coming in before). The only other time I came out was to clear shrubs and this time I wanted to do something more mechanically oriented. So I got to drill and drive. In fact I screwed in the truss boards you see in the pic and I fastened the rubrail around our slip. The sailboat and slip are in pretty good shape. Now to test out the swim ladder :)

Posted by Andrew at 1:15 PM No comments:

Will I get home tonight?

Uh, guess which flight I'm on. Not only is it the last one out of here (Dulles) tonight, but it's (a) already delayed, and (b) dropped off the list of flights shown at the gate (where I am currently). That doesn't look good. It could mean they've (a) changed gates or, worse, (b) cancelled the flight. Like Delta's never done that to me before. And what the *@$Y(@*# @*$#%@@ )*&&^$!(*$!!! is it about Atlanta that all the flights leading up to mine were also all delayed? Like I said...I hate flying through Atlanta. I wonder when I'll get to sleep tonight and where? Yes, I have slept on the Dulles floor before. Not fun. And the only good sushi restaurant here is literally 50 gates away down the concourse. 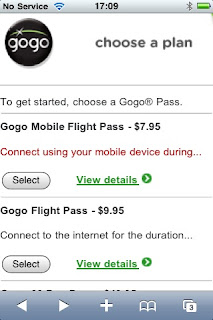 Thouht I'd try this new in-flight wifi service. Mainly to see how much it was. $7.95 for the duration of the flight isn't half-bad considering boingo costs about $9.95 at airport hotspots. Mind you, this is the "mobile" plan so I can't switch over to the laptop. That costs $9.95, making it comparable to boingo. This could be really useful if I needed to sync up with my svn repo in-flight. Right now though I'll just goof around with email and blogger, keeping an eye on battery life.

Good thing they're not charging by the byte (yet).

Posted by Andrew at 5:28 PM No comments:

Something new to try on the barbie 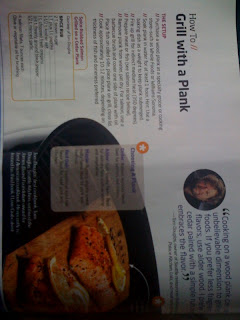 Saw this in the in-flight magazine. Looks interesting. The article says pine may impart good flavor as may oak. Just need to find one of these planks (or go off into the forest? :) 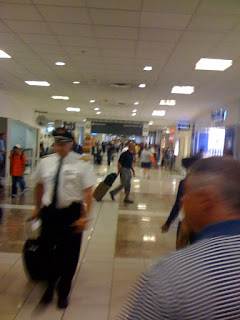 I hate flying thru Atlanta.

Update: I guess this deserves an explanation. The reasons are that ATL is just too damn busy, the airport is too crowded and too "old". It feels too cramped compared to the larger, airier airports such as DTW, CLT. And what's worse, Delta always seems to screw something up with puddle-jumper flights in/out of ATL. It's happened often enough for me to think it routine that Delta will cancel a half-filled flight so that they can bump everyone and fill up a later flight to GSP. It saves them fuel but it inconveniences (the hell out of) passengers wanting to get home. This time around they managed to botch the incoming connecting flight. We sat on the tarmac at GSP for 40 minutes before departing because (they said) ATL was too busy. Can you imagine that? I dunno, this time around I suppose it could really have been the weather cause it was a pretty bumpy ride there.

Note to self: avoid flying through ATL at all costs...fly NWA through Detroit, Memphis, or Cincinnati instead. And if that becomes phased out, I'd rather drive in the beamer an extra couple of hours to fly out of Charlotte. Much nicer airport than ATL.

Posted by Andrew at 3:51 PM No comments: 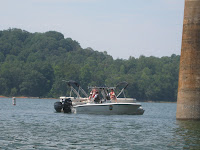 The "no-fun zone" seems to have followed me from Vancouver. Yup, there are cops on boats out here on Lake Hartwell as well. They always seemed kind of pissed off to me, maybe because they're forced to wear shirts and ilfe preservers while everyone else is in bathing suits. This guy was actually from the Department of Natural Resources or the DNR. He was checking for the 5 items every boat is supposed to have on board: life jackets (one per person), throwable life preserver, fire extinguisher, audible signal, and boat registration. We had everything on board but forgot about the boat's horn. And we don't have a whistle or air horn on board. Still, he didn't cite us although he seemed to be busting every other boat out there. I wonder how much each citation is, but I really don't want to find out. We should buy a cheap whistle and keep it on board just in case.

Posted by Andrew at 3:12 PM No comments: 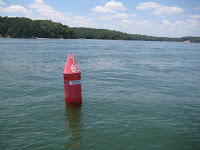 On Friday, July 3rd we went out on our powerboat in search of the T-60 buoy on Lake Hartwell. A few years ago I went on a poker run on my Harley and one of the stops was at the T-60 Grill, a restaurant on the far side of the lake. Lake Hartwell is quite large and yet it seems like restaurants with lake access are few and far between. Pitcher's restaurant used to be a fun place quite close to us, but because it's more or less a seasonal enterprise, it kept changing hands and finally closing. Right now its dock is still there but floating empty. Pity, as it was a fun place to go get some beer and wings on your boat. Anderson has Charlie T's, just about the only place left open with a dock where you can still do this. T-60 Grill was supposed to be another such place, serving "The Buoy Burger" among other things, but it's really far away. One time we went on the trek to find the place, but because we stopped to swim every so often, we never did quite make it. The grill is (was?) named for the T-60 buoy that marks where the restaurant is supposed to be. Here's the buoy, but where's the grill? We didn't see any dock with a gangway up to a restaurant. It didn't matter, we brought our own sandwiches anyway. And it's the journey that's important, not the destination, right? Something like that. On this occasion, the journey was so long I ended up burning my scalp. We were also so tired after this trip that we actually packed it in and did not stay for the 4th of July fireworks. It's usually pretty fun to sit there on the boat while they go off above your head, but this year we picked up anchor and headed in. Today I'm sitting inside keeping my head out of the sun. I'll be out later to BBQ some steaks, but I'll wait for the sun to go down a bit before. 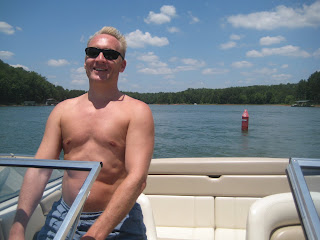 Posted by Andrew at 2:52 PM No comments: