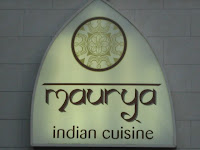 Yesterday we went out for my brother-in-law's wife's birthday lunch. We went to Maurya, an Indian restaurant on Broadway. My brother-in-law's wife picked the place, partially I think because it featured a lunch buffet. Now normally "Indian" and "buffet" to me would suggest crap food (as I don't like curry and buffets can have pretty crappy food). Here, however, the food was truly fantastic. Not overly spicy-hot, but very flavorful. I can't remember all the dishes I had now, but I do recall the Tandoori chicken was my favorite. The shot below has most of what was offered—the cooked spinach was very good (creamy) although I don't think it needed the baby corn in it, the rice and beef something-or-other (like a stroganoff) was also delicious. I don't know how expensive it was but definitely a place I'd go back to. The only gastronomical disappointment this trip was not being able to go to Tojo's and doing the omakase. Next time, perhaps. 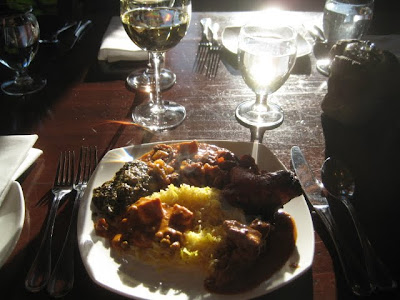 Posted by Andrew at 2:57 PM No comments:

A night out on the town 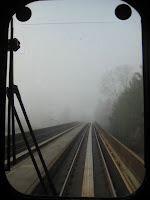 On Canada's Boxing Day (Dec.26), the biggest shopping day of the year I think, I went to Oak Ridge mall via the SkyTrain. Actually all the time here I've been making good use of Vancouver's Light Rapid Transit (LRT). Where I'm staying is situated right by one of the stations which makes moving around the city quite convenient. At Oak Ridge I wanted to buy myself an iPhone, to replace the one I lost in Barcelona. I thought maybe it'd be a touch cheaper here with the Canada/US exchange. Nope, Apple wanted $799 for the model I want and wouldn't let me leave the store without locking it to a Canadian service provider. So there goes that idea. I'll have to wait till I'm back in the States. The wireless bluetooth headphones I want to pair to the iPhone were also more expensive than what I could get them for online—that's going to be the next evolution in my skiing music system. Some 20 years ago I used to ski with a bulky Sony Walkman tape deck strapped to my chest. The thing was heavy and difficult to control (buttons were inside this case; flipping tapes was a hassle). Currently I ski with one of those postage stamp-sized iTunes shuffles and wired headphones. Pretty decent and lightweight system. However, I met a British guy at lunch who had an iPhone and bluetooth headphones—no wires! "The way of the future," he said, and I agree! I've already ordered the headphones. They should pair up with my laptop as well which should mean wireless music on my next flight to Europe. 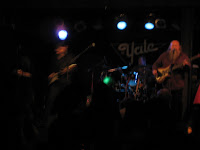 After Oak Ridge I went down to Richmond to go out for sushi with my brother. I should have taken pics of the excellent sashimi we had but we ate it up so fast there wasn't time. I should probably take note of the sashimi I like: uni (I think that's what it was, the creamy urchin), tako (ocotpus), and the giant clam, but I forget its Japanese name. I tend to like the gummy stuff. I should have also ordered mackarel but my brother said he didn't like it. Oh, one other thing was the quail egg in warm sake. Very tasty. On the way to where I'm staying I decided to keep going on the SkyTrain to Yaletown to get to the Yale, a hotel downtown with a decent live rhythm and blues bar at street level. I had checked their schedule beforehand so I knew there'd be a band called Mud Dog playing but I've never heard of them. They reminded me of Steve Earle (e.g., the song Copperhead Road). They were pretty decent and the harmonica player was outstanding! 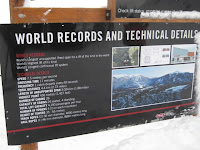 The second day skiing was sort of the reverse of the first: ski Whistler first, then hop on over to Blackcomb. Part of the reason was that both days the only sunny slope that we could see was Blackcomb's 7th Heaven. It seemed to be the only sunny patch on both hills both days. And it looked like it had some moguls on it. So back on the Peak 2 Peak, but the other direction this time. I took a snap of some of the factoids about the gondola. In case you can't read them in the image:

It runs at 7.5 m/s and takes 11 mins to cross the 3 km (1.8 mi) span. The haul rope (46 mm in diameter) is 8,850 m long. The shot at bottom is from Blackcomb's 7th Heaven, back towards Whistler. But I blew this shot because Whistler is to the right. I should have panned to the right to show Whistler and the two bowl chairs, but I was trying to capture the sun. The sun is there, and it was sunnier than the picture suggests. 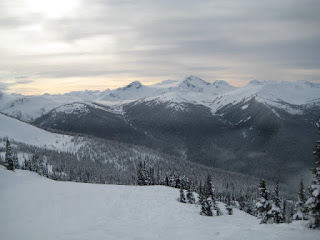 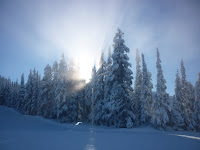 Ah skiing at Whistler/Blackcomb... Started off going up Blackcomb. The first day mainly in "socked-in" conditions, in a cloud most of the day, with the sun peeking at times. I don't know Blackcomb well as I used to prefer Whistler. The intention was to ski some runs and then get to Whistler via the Peak 2 Peak, a modern marvel of engineering. 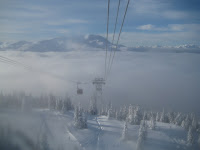 The gondola between the two peaks is unique. A touch creepy, suspended at about 1,500 above the valley floor, but actually very convenient—you don't have to ski down to the bottom to get to the other mountain. Which is good because you don't have to ski through all the "sitting ducks" on the flats near the bottom. That should be particularly handy in the spring when the snow at the bottom gets slushy. 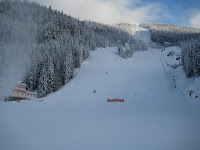 Skied Whistler the remainder of the day. The Harmony Bowl, the preferred ski area back in the day, has changed drastically. The old blue chair (a double!) is long gone, replaced by a high-speed quad that goes up to where skiers used to hike, the top of the bowl. I suppose that's a good thing, but on the other hand it eliminates the old blue lift line, which used to be an excellent mogul run. Added to this chair, there was yet another chair, the Symphony chair was situated way back in what looked like a new back bowl behind Harmony. We never got to ski there really since the chair, while running, wasn't allowing people on as the mechanism at the top kept freezing. Yeah, it was cold! And your truly decided not to wear a sweater, thinking that spring skiing attire was perfectly acceptable in December. D'oh! Froze my butt off, particularly since we couldn't find good mogul runs to warm up on. No mogul runs on Whistler? Strange. One of the highlights, however, was the Dave Murray downhill, pictured here. This is the ending point of a pretty hairy run they've set up for the 2010 olympics. Yes, I skied down the same run that we'll see the athletes ski down in February. And I've gained a new respect for these guys. How they can fly down this run at their speeds boggles the mind. I can't wait to see them on this one part, that seemed nearly vertical to me. It wasn't long but it dropped right into a flat spot, compressing the snot out of your legs. There was also a bunch of netting all set up for the skiers. I bet there'll be a few wipeouts. 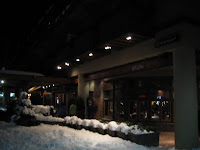 Last night we had dinner at Araxi, the high-end place that we heard of on Hell's Kitchen, as it is the place where that show's winner will go to work early 2010. It was just down the road from where we're staying (Mountainside Lodge), a couple of buildings away from both Whistler and Blackcomb gondolas.

Here are my two dishes: grilled octopus followed by venison. The octopus was tender and not as tough as when I made it. I wonder what the secret is, must be longer boiling time. The venison was really good. It doesn't look like much but it was actually just the right amount and everything was prepared really well. Even the parsnip on which the venison pieces sat. Parsnip? I've never heard of it, but I really liked it and look forward to trying to make it at home. It's just vegetable I think and hopefully won't be too difficult to prepare. Tonight we scale down the choice of restaurant and go to a BC favorite, The Keg. It's a chain but I like it. Looking forward to a nice steak after a full day of skiing.

Posted by Andrew at 9:37 PM No comments: 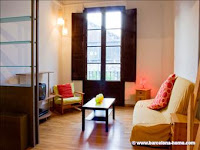 I never updated the blog upon returning from Barcelona. Part of the reason is that I've been particularly busy this semester with a large number of projects happening all at the same time. Last week (last week of school) I had two out-of-town visitors, right in the middle of final exams. Not the best timing, but then again a whole bunch of other deadlines all piled up at the same time. ETRA papers were due, including reviews of a dozen or so papers. I submitted three long papers and three short papers. Now I'm working on completing two more papers for submission to Graphics Interface. Deadline two days from now. Five long papers in about as many weeks? Crazy! Anyway, back to Barcelona...beside meeting up with my brother and my professional activities, another mission objective was to scope out an apartment for my stay there next May. I ended up reserving what you see in the picture—it's billed on the Barcelona Home web page as "an apartment in the middle of a shopping area". I went there via metro to check it out. I should make a note to myself: the web page states it's by the metro station Espanya, but actually I think it may be closer to Hostafrancs. Right by that metro station is where I saw some of the stores that I think I can use for buying basic supplies like groceries. I've also started putting up some recipes that I would like to try while living there. Besides this I guess I should also start assembling music to bring with me. Of the recent bands that I've found, I really like these:

The Blasters are the latest band that I heard on Rasio Paradise. It's one of those rare finds where the entire album is really good. All of the above albums are like this. Surely stuff I'll have to bring with me to Barcelona next year. And a pair of mini speakers...
Posted by Andrew at 9:58 PM 1 comment:

The Water is Back 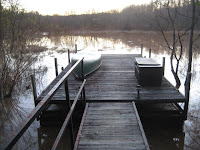 The other day it rained all day and that brought the water back filling up the lake. Our dock is floating once again. Even the rear floats are floating. I don't think it's done that since several years ago. For the past two or three years it's been sitting on dry land, so it's a real thrill to see this view. And right now in late fall, with the leaves down, we can see quite a bit of water from our kitchen door windows. It's really nice to see the sky reflected in the water. The view below is from our dock just after sunset. It's nice to be looking at water instead of a meadow. 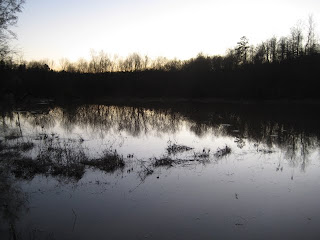 Posted by Andrew at 9:42 PM No comments: