That thing got a Hemi? 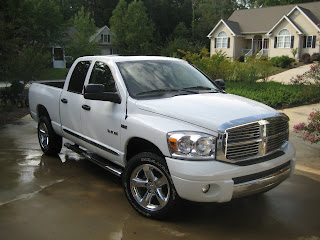 After 10 years and about 70,000 miles, it was time to trade in our old GMC pickup (it actually had just under 85,000 miles; we bought it used with about 15,000 on it—I just recently found that the 15,000 miles it had put on in a few short months back in 1998 was because it had been a fleet vehicle). So above is the latest addition to our stable. With the current economy driven by shoddy lending practices and exorbitant fuel prices (at least in comparison to what they were prior to summer 2008), this was a really good time to buy a truck. They weren't quite giving them away, but with the 2009 trucks arriving this week, I ended up paying about a $1,000 more for the new truck than what I paid for our used one 10 years ago! (Not counting tax, title, licensing fees or what they gave me for the trade-in, but still, the bottom line looked good on paper.) This was the last white Dodge Laramie I could find within about a 500 mile radius. A couple of weeks ago I almost literally saw two other similar trucks get sold right under my nose (one by about a week of me watching it remotely from Finland, the second a day after I had taken it for a test drive). So it was either snap this one up or pay about $10,000 more for a new one. I went for the savings.

The truck is fairly similar to our old GMC, but equipped with some modern features. Like our other vehicle, the truck has a sunroof, bluetooth cell phone connectivity, satellite radio, a nav system, and leather seating (it's not quite at the same level of quality, but it's good enough to haul garbage and mulch in :) The ride is way up there (you literally have to climb into it), heightened partially by its 20" wheels. Filled with nitrogen no less. What's up with that? I dunno, sounds a bit like a scam to me, especially if it costs $5.00 a tire (WTF?!) and especially when you start seeing claims such "Not all nitrogen is created equal." To counter, I like the observation that regular old air, in which the tire is immersed in anyway, contains 78% nitrogen to begin with. Nitrogenated beer I'll buy, but I don't think I'll be paying $5.00 to fill a tire. It's bad enough when gas stations charge me $0.75 to fill up with air...but I digress...other options of note on the truck are the towing package (a must-have), tow mirrors (heated even), and yeah, it's got a Hemi—sweeeeeet! 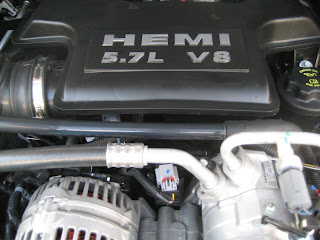 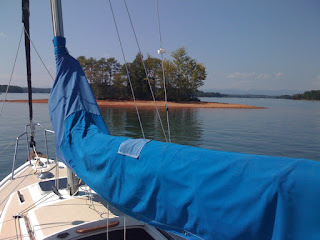 We capped off the weekend by swimming in Lake Keowee on Sunday. The water temperature was perfect—not "bathtub warm" and not yet too cold. We're saving the sailing for colder, windier days later in the fall/winter, and right now just using "Pudgy" as our Lake Keowee swim platform while "Tippy II" sits on the trailer. Getting out of the water onto Pudgy is more difficult than onto Tippy II, but it's been a disappointing drought year on Lake Hartwell, and our first summer when we could not use the power boat. We were hoping that either of the G, H, I, or J Atlantic hurricanes would bring some water our way, but they all missed us (Ike is projected to head towards Houston and isn't likely to turn NE). Still, we've gotten better at anchoring and docking the sailboat.

Posted by Andrew at 2:44 PM No comments: 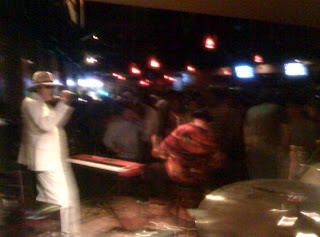 Last Friday the Hounds played 356 once again, and again on "First Friday", the night before Clemson's first home football game of the season. First Friday entails a parade and with that usually a decent crowd. Which is who we like playing to: a packed house. I was getting a little worried around 11pm when there were only a few people in the place, but it picked up quite a bit by 11:30pm. By the time we were into our second set the bar was jammed. I think it was probably our best performance yet. Maybe we're just gelling as a band, improving as individuals, or both. I think practice on my electronic kit is paying off as I feel more confident on my road kit. I think I finally got the cymbals organized the way I want now. My 14" crash was a bit too far to reach, but sticking in the boom vertically seems to have improved the layout. The 16" crash fits in on a side boom just below the 14" and above the ride. I'm fairly happy with the cymbals, but if I were to change anything out, it might be the ride to something less brilliant and more bell-like. Maybe a larger 22" ride? There seems to be a bit too much shimmer on the 20" A-custom when playing ride, I think I'd prefer a little more ding to it. But there's no rush, the kit sounds pretty nice as is presently. When do we play next? 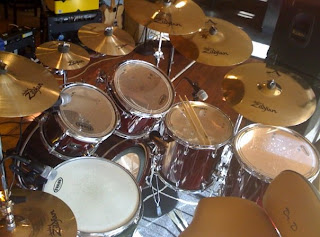