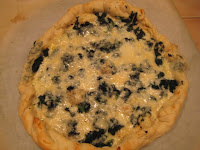 This week I decided to try my hand at a few of my favorite recipes. On Saturday I made our homemade pizza, Pizza Rustica with Wild Nettles. I found this recipe in the back of a Coastal Living magazine issue. It looked interesting, save for the wild nettles. I don't know what those are or where to get them so we usually substitute kale. This is a type of "pizza bianco", or a pizza that lacks that the traditional layer of tomato paste. Instead, this particular pizza has as its base layer a paste of roasted garlic. It is then topped with a finely diced red pepper flake and thyme leaf seasoning, followed by four cheeses along with the chopped up kale. I highly recommend this recipe along with the accompanying pizza dough recipe, which I also made the same day. I'm pretty slow in the kitchen, so it seemed like the whole thing took me 3 hrs to make, but it was well worth it. 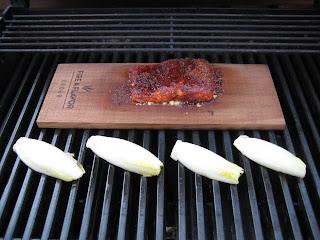 Sunday was such a nice day that I thought, why not barbeque something? Later this week I'm making Gordon Ramsay's Beef Wellington, so I wanted something other than steak. Some time ago I came across this Salmon on a Plank recipe in an in-flight magazine. I think I've written it up in this blog some time before. From another previous BBQ experiment with octopus, I had grilled Belgian endives, that I thought would go well with salmon. Unfortunately I'd forgotten where I saw that recipe for grilled endives, but luckily I found something similar in Mario Batali's Italian Grill. 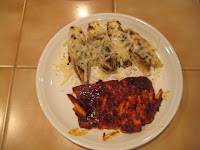 Batali recommended Endive with Marjoram and Provatura on the grill. It looked simple enough, I happened to have the cheese (Provolone) left over from the pizza and we had a lemon. It seems like it's just a basic vinaigrette that is used to coat the endives before going on the grill. I was actually surprised that Batali didn't suggest a pinch of red pepper flakes to the vinaigrette, so I added it thinking he'd just forgotten. The cheese atop the now tangy endives combined really well and balanced out the sweet spice rub on the fish. My only trouble with this dish is that the fish takes way longer to cook on the grill than what the recipe suggests (more than double the time I find). My timing was a bit off so I had to hold warm the endives in the mircowave. Seems kind of lame but it didn't seem to spoil them; they still had enough of a crunch. Pretty good, simple dish in all, the pic (my presentation) doesn't really do it justice I'm afraid. 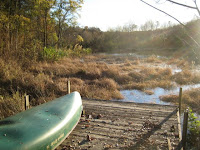 This past weekend was especially warm for November (went up to 75F) and particularly notable for the return of the water in our lake. The remnants of tropical storm Ida dumped about 4-8 inches of water over a two-day period, resulting in about a foot of water topping off the lake at 660 ft, its "full pond" level! We haven't had the lake at full pond for what, 3 years now? Last year it was about 15 feet below, precluding us from ever launching our powerboat the entire year. This year we had the boat out but almost had to pull it out due to decreasing lake levels. Luckily we had a fairly wet early fall which allowed us to keep the boat in till just past Halloween. Now, with Ida's contribution, our dock is floating (yes, floating!) on a foot of water, for the first time in a long time. The water has actually submerged the beaver dam behind the house allowing me to canoe out to the lake (Corey missed out, attending the SuperComputing conference).

I'm home alone this week but luckily I was only given one gardening-related task, and that is watering the whatever-those-leafy-plants are underneath the deck. I also took a pic of the grass germination, thinking that Corey might like to see that. I also took the leafblower out and cleared the deck as it was starting to accumulate. I did a couple of other things around the house, but mainly I've been focusing on the meal plan and figuring out what to cook and how to do it. That and of course taking the cats out for walks in the forest. Below is a pic of Sidney finding something that must have been particularly odiferous. She rolled around in it for quite some time. I think Harley later found it as well. Lucky for me the scent was detectable only by the feline proboscis and not mine. Mine's a little stuffed up by a cold. Luckily it must be a low-grade variant because it's not too debilitating, only just slightly annoying. 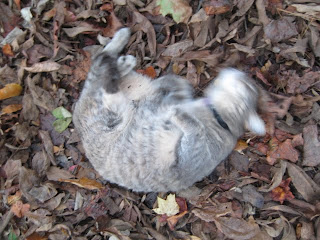 Shoring up the foundation 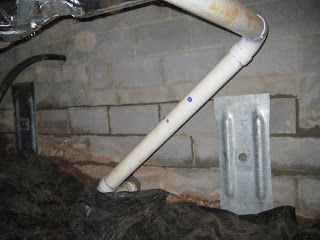 The above pic is of our eastern wall, as seen from within our crawlspace. Back in August I happened to notice that a supporting concrete block column had its top block tilted such that it was no longer supporting the main beam on which the house sits. This was partially due to the sinkhole that formed behind the column and partially due to the side wall having sunk into the ground signified by the large fissure in the block and brick. You could see the outside light through this fissure, which clearly was not a good sign. As one of my friends used to say, "you could see large sums of money stuck here and we'd need a professional crew to come out and yank it out for us" :) Yeah, you could clearly see that the repair work would run into the thousands. I don't have a pic of the leaning column, but the pic above is of the finished job. It took the crew about three trips to get all this done. First, they noticed that our builder hadn't used a wide enough foundation so that they could not sink down the steel support jacks to lift the house up from the inside. So they had to come back to dig outside the house to install these metal girders beneath which they could put in the jacks to hoist the house. In doing so they cracked the sewer drain pipe and shifted the wall such that there was a noticeable 2-3 inch offset between the lifted wall and the wall above (that luckily hadn't caved in yet). So, on their third visit, they sunk in these anchors about 5 feet outside the house, then connected those to the anchors you see in the pic. There are large nuts on these anchors so that we can tighten up the anchor system in the case of the wall shifting in further into the crawlspace. In the end, I think they did a decent job of fixing this potentially disastrous foundation problem. Glad that's over! 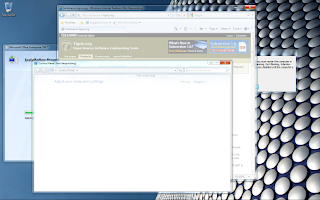 In getting ready for my upcoming trip to Barcelona, I decided on trying to dual-boot my MacBook Pro so that I wouldn't have to bring two laptops with me. I need a Windows machine to run a portable eye tracker that I have on loan that I'm going to demo over there. After numerous re-installs and false starts, I think I finally have a winning combination: Windows 7 (32-bit) with OS X Leopard (10.5.8). However, I set up the dual-boot partitions and am using the Windows drivers from the Snow Leopard (10.6) DVD. I was hoping that I could switch over to Snow Leopard and just go with that, but that upgrade broke too many things that I need so I had to roll back to 10.5.8. Similarly with Windows—I first went with XP. After getting that going, following a multitude of Windows Updates to SP3 et al, XP crapped out in insisting on installing some SQL Server service pack...over, and over, and over again. I finally got fed up with it and thought why not try Windows 7. I first tried the 64-bit version, but that crapped out the eye tracking software (wrong driver). So, a clean re-install once again, this time with the 32-bit version. The screenshot above captures one of many frustrations in doing the lengthy install—occasionally (and there are more than one of these occasions) everything just sort of blanks out while Windows is "processing" something. I swear it seems the only improvements Microsoft ever implements are aesthetic, meanwhile, their underlying OS can never do anymore than 1 job at a time. So much for "multi-tasking", IMO Windows still can't. I wish they would just throw in the towel on their ancient DOS-based OS and switch to a Unix-based "enginge" under the hood, like Apple did. But to be fair, the Mac isn't without its frustrations, either. Snow Leopard, Apple's 64-bit OS isn't all that ready for prime time either. Or at least the stuff that I use (fink) hasn't really caught up to it. Or maybe I'm behind (I still use Qt 3.3). Anyway, I had to clean install that side of the MacBook as well, and re-installing all the fink stuff takes about as many hours as re-installing Windows (maybe longer even because fink has to compile everything from source). Hopefully by the end of today I'll be back to where I was a couple of days ago with the new tracker, as seen below. 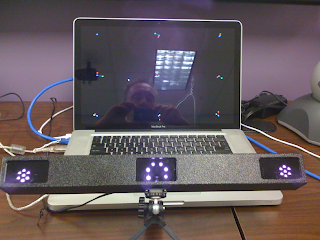 Posted by Andrew at 3:54 AM No comments: